The Weather’s Damaging Effects On Asphalt 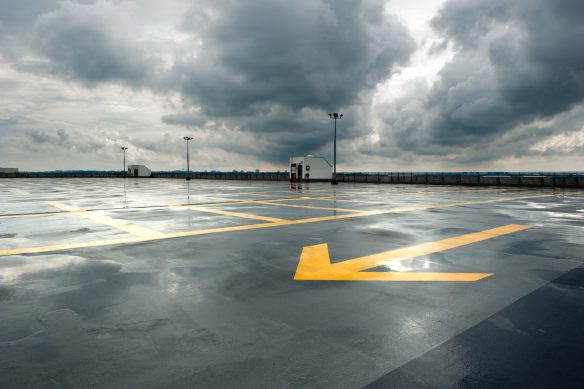 California may be known for its natural beauty and laidback atmosphere, but the state is no stranger to harsh weather. Historically, the Golden State is subjected to oscillating patterns of severe drought and heavy rainfall combined with temperature extremes. More than just an uncomfortable nuisance, such weather patterns strain vital infrastructure, promoting costly damage that, for an entire state, can reach billions of dollars.

From potholes to sinkholes, California weather can certainly cause headaches for businesses, government officials, and workers responsible for repairing roadways, parking lots, and other concrete structures. To mitigate the destruction wreaked by nature, an understanding of how cold, heat, wet, and dry conditions affect asphalt can be used to implement preventative measures.

When it gets cold enough, the ground beneath a paved surface can freeze. During a process known as frost heave, ice forms in the soil or clay and pushes the ground upward, causing pavement to crack from below. Recurring temperature fluctuations also promote structural failures through the alternating expansion and contraction caused by the heat and cold. This is called thermal fatigue.

At peak afternoon temperatures from 90 degrees Fahrenheit and above, roads can start to buckle, ripple, and crack. Sometimes the pavement looks like it’s been subjected to a subsurface TNT explosion as the road disintegrates and cars fling the debris far and wide. Other times, it looks as though the earth has just opened wide. Warm weather causes asphalt to expand at cracks or joints penetrated by moisture causing “blow-ups” or points where the surface has been pushed upward.

Along with the heat, dry seasons are common in Southern California. During a drought, the sand or soil beneath a road or parking lot dries out, pulling away from the surface and promoting cracks or even a collapse or sinkhole.

Carbon dioxide turns rain acidic. Overtime, this CO2-rich rainfall can dissolve the substances used in roadways and the ground beneath. Bitumen, or asphalt, is a common additive in concrete used for roadways and parking lots- it’s a viscous, petroleum-derived substance used as a binder and is responsible for coloring pavement black. As rain washes over the surface, the water can separate the flexible bitumen from the aggregate material resulting in raveling and pothole formation. Massive sinkholes may also form as the rain dissolves the clay or bedrock beneath.

If a burst of wind is powerful enough, it can tip a 40-ton semi. Stormy weather and air currents can bring dangerous winds that blow away signs and knock down electrical lines. Even mild wind carrying sands can act as a corrosive agent that erodes the pavement overtime.

Implementing regularly scheduled maintenance is great for cleanup and safety as professionals can identify and quickly solve any observable issues. They can also apply a seal coating designed to cut down on wear and tear and reduce the cost of maintenance. Asphalt Slurry Seal, for example, is designed to stop weather damage, resist oil and gas, and beautify pavements. If your parking lot or garage is in need of repair, get your free quote from Curcio Enterprises! We cater to the needs of all sorts of facilities, including business and industrial parks, airports, hotels, shopping centers, malls, and event venues.